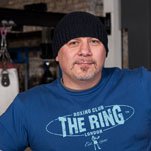 Mark Burford or ‘The Burf’ as he is more commonly known, is the head professional boxing coach for The Ring Boxing Club. Also a licensed professional Manager and Promoter, Burf re-launched the legendary Ring Boxing Club in February 2003. The Club has gone from strength to strength, even being featured in its own Tv series. Burf puts his and the Clubs success down to two things ‘Firstly, I know what I’m doing, which is actually quite rare’ Says Burf ‘and secondly, I don’t run a professional boxing club… I run a boxing club professionally, which is why we succeed! The Burf has created not just a club, but has created what he describes as a ‘holistic’ approach to boxing.” The Club, the classes, events and clothing for The Ring heritage brand, have all demanded total focus,…However, says Burf, none of it happens without The Ring Boxing Club members and the friends of the Club. I never forget that, I make sure my Trainers never forget that, I make sure my Fighters never forget that…Our Club members are the stars, not us!

Burf also runs his own registered Children’s charity The Ring Foundation and donates a percentage of every personal training session he does with his clients to it. Burf says :

“The Ring Foundation is a lovely charity and it came about because of the support we got from our Members. The club has also been involved in raising hundreds of thousands of pounds for a myriad of charities through The Ring Boxing Club events.”

When you pay using PayPal, one of our Personal Trainers will contact you to arrange a time for your Introduction to Boxing
at this legendary boxing club in Southwark London SE1.